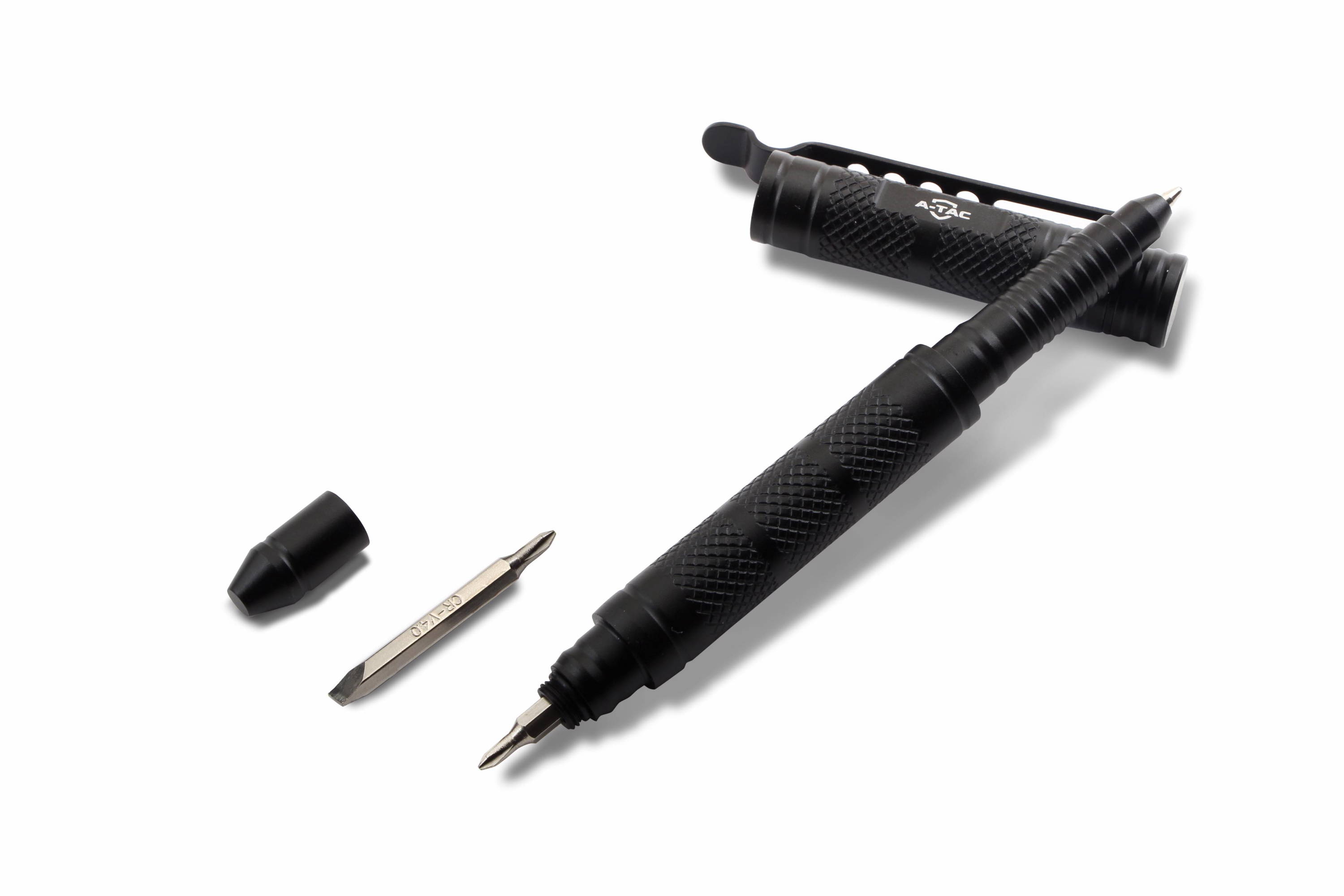 The TacTool Pen is an A-TAC creation that offers lightweight and comfortable functionality and versatility. It's always handy to have a pen and screwdriver with you at all times, however, when things go bad you need something that can effectively protect you. The TacTool is the answer.

From the boardroom to the team room, you will always want the TacTool Pen to be with you!

The Ultimate Self-Defense Tool - The TacTool Pen should be the most important piece of gear in your EDC (Every Day Carry) lineup. Unlike a knife, when used correctly the TacTool won't land you in jail but will certainly be an effective self-defense tool that can be carried anywhere - think airplanes, restricted security zones, etc.

Big Things/Small Package - The TacTool Pen delivers a ton of gear in a small and discreet package. At approximately 6” inches long, it is a silky smooth pen that contains both a phillips and flat-head screwdriver as well as a blunt strike tip designed for self-defense applications.

Blunt Strike Tip - This is what sets the TacTool Pen apart from other tactical pens. Engineered to exponentially magnify the velocity of any strike, the blunt strike tip concentrates the energy from any strike into your opponent. Unlike a knife, it won’t puncture tissue and stab your opponent but that doesn't mean it won’t inflict maximum damage in a less lethal scenario.

Innovative, Collaborative Design - The proprietary TacTool Pen design is the culmination of years of trial and error by A-TAC advisors from the special operations, law enforcement, and martial arts community.

Ultra Rugged Construction - The TacTool Pen is made from nearly indestructible black anodized aircraft grade aluminum - in a non-reflective finish that looks both rugged and classy at the same time.

Discreet - Despite it’s heavy duty construction, the TacTool Pen fits in any pocket just like a normal pen. It is extremely low profile and will not raise suspicion no matter where you take it.

The Pen Is Mightier Than The Sword - With the TacTool Pen by A-TAC - you have both! The TacTool Pen does its primary job as a precision writing instrument very well. Plus, it accepts a standard G2 ink cartridge which makes it super affordable and easily replenished at any office supply store or online.

Guaranteed Performance - If for any reason, your TacTool Pen breaks, contact us immediately and we’ll get you taken care of. But, that’s not going to happen considering we’ve driven a truck over this thing and didn’t even produce a scratch!

The Clip That Keeps On Clipping - OK, sure, maybe the clip on a pen is something you don’t think about much, but this one takes the cake! There is nothing worse than a bent clip that no longer works to hold your pen in place, so we reinforced the clip on the TacTool Pen to ensure lots of life in hard-use scenarios. However, should you wish to do so, the clip is removable.

Veteran Owned Brand - Every purchase from A-TAC supports veterans and small businesses. A-TAC was built on family values and is a brand you can trust! 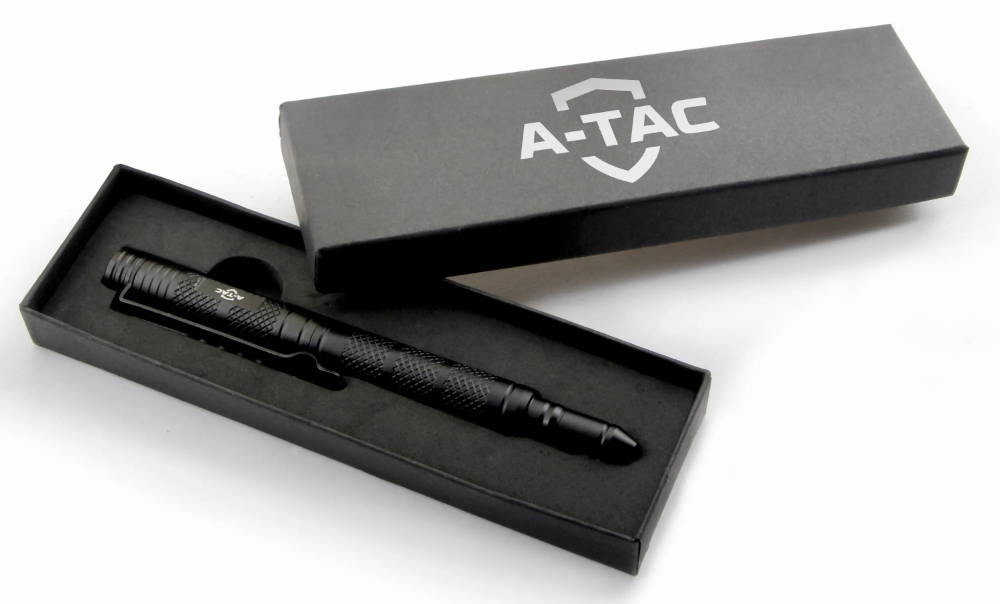 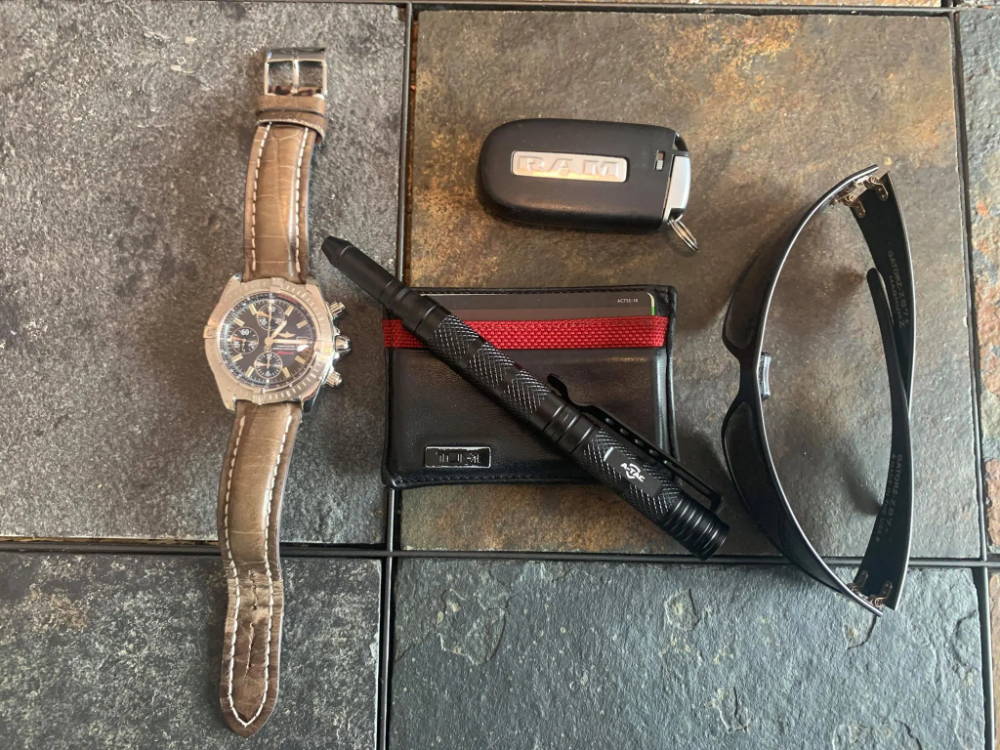 Here's Why People NEVER Leave Home Without Their TacTool Pen...

Every officer knows that taking copious and detailed notes during an investigation will pay dividends years later when required to testify in court. Having a high-quality, reliable writing tool is incredibly important. I've come to rely on the TacTool both on the job and for off-duty EDC not only as an excellent pen but a convenient tool for adjusting kit or firearm accessories and even as a last resort for defensive applications. The TacTool feels solid in the hand and writes very nicely. It is somewhat longer than other tactical pens I've used with a large cap which makes it much more functional as a defensive tool that's always in hand for example if I were suddenly attacked while making notes at a call allowing me to create space to get to an appropriate force option. The built in screwdriver bits are very convenient and have come in handy more often than I would have thought. Highly recommended.

I write a lot and don't go anywhere without a pen of some sort, but this one has been by my side since I acquired it as it not only is a writing tool but also a handy tool with screwdriver bits and more. Add this to your collection.

⭐⭐⭐⭐⭐ - A Must-Have For Your Everyday Carry Lineup

The TacTool Pen is in a league of its own when it comes to functionality, quality, and price. The screwdriver that comes with the TacTool has been put to use more times than I would have expected without failing. The pen writes very well and feels solid in my hand. The strike tip is an added feature that gives me an added level of confidence and security, which is why I keep it on me at all times. This is an exceptional tool that is well worth buying and adding to your EDC lineup.

Get Your TacTool Pen Today! 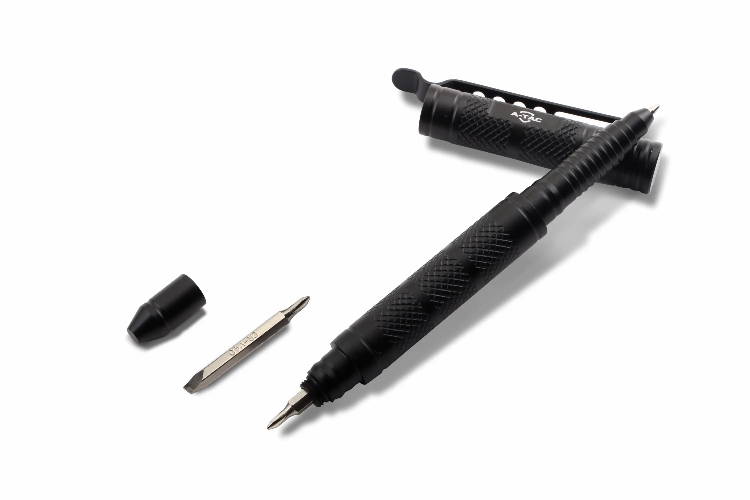